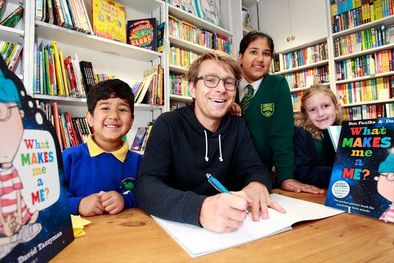 Mums besiege bookshop for glimpse of 'dishy' Mr BloomActor Ben Faulks was in Lindley to promote his new book.

Around 50 mums besieged a children’s bookshop to watch Mr Bloom actor Ben Faulks read from his new book.
The author, something of a sex symbol to mums who watch him on CBeebies, was given a warm reception at The Children’s Bookshop in Lindley.
Ben, who was educated at Bretton Hall College, was promoting his latest book, What Makes Me a Me?
Shop owner Nicola Lee said a few children were disappointed that Ben hadn’t dressed up as Mr Bloom but the mums seemed to be happy.

“He was lovely, very personable and great with the children.”
She said a lot of the mums managed to get ‘selfies’ with Ben.
“He’s a good looking gentleman,” said Nicola.
“The mums and children were queueing out of the door. I think there were only three dads. Most of the children were pre-schoolers aged from two to five.
“Mums were getting selfies with Ben - he’s very dishy and a very pleasant person.”

Ben Faulks was born in Cornwall and currently lives in Yorkshire. He is married with three children.
Last year he admitted to having received some naughty fan mail from mums.
He said: “Well, there have been letters. Er yes, rather fruity letters. And Valentine’s cards. Maybe a few marriage proposals.”

​
Appeared in the Huddersfield Daily Examiner - October 2017
Powered by